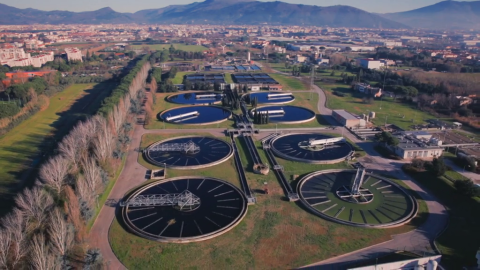 With a population of nearly 200 000 inhabitants, Prato is a medium-sized city in the centre of Italy. Known for its centuries-old textile tradition, the city is also home to one of the biggest Chinese communities in Europe, employed in the fashion industry. This industry is the second most polluting in the world. It requires around 93 billion cubic metres of water a year, according to a report issued by the Ellen McArthur Foundation last year.

In this sense, Prato with its Bisenzio river, its intricate system of canals and its underground water supply, has managed to provide the necessary quantities, or at least it did so until the 1970s. Benefiting from Italy's economic boom, the city’s industry was growing, and so was its need for water. This is the moment when the GIDA plant specialising in waste water purification was born in Prato. Created in 1981, the system is still considered today an example to follow by other European cities in terms of water management and sewage treatment.

GIDA was created as a public-private partnership between the Municipality of Prato and the Regional Industrial Confederation, where the majority of the shares of GIDA are today publicly owned. Through its 5 different plants, GIDA manages all the wastewater from both industry and the public. This amounts to up to 50 million cubic metres of liquid a year, or the equivalent of Olympic swimming pools. Approximately 11% of it goes back to the textile industry through the industrial water aqueduct. This requires that the water be treated above the legal requirements. At the same time the benefit is substantial – 4.5 million cubic metres remain in the natural water system. The rest of the water goes back into the surface water system, into a nearby creek.

This system allows, on the one hand, the industry to use limited amounts of new water and, on the other, reinforces the necessary quality standards.

Currently GIDA manages treatment plants for the municipalities of Prato, Vaiano, Vernio and Cantagallo, the Calice sewage treatment plant and the industrial aqueduct network. Now more than ever, GIDA is prepared to welcome the new challenges stemming from its role in research and the application of innovative and energy-efficient technologies such as: