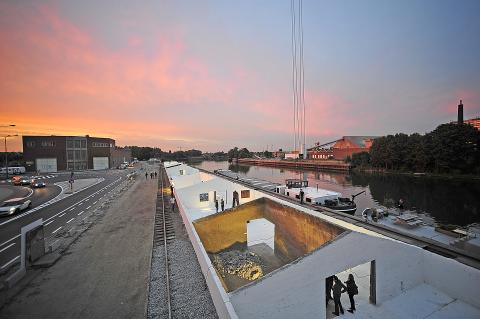 Organisation or Company:
City of Ghent

In Ghent, Belgium, the circular economy brings together companies, institutions, governments and citizens on the way to sustainability. The Old Dockyards is a waterfront housing project where closing loops at the district level is key. Approximately 1,500 housing units will be constructed through public-private partnerships (PPPs).

Ghent wants to develop a holistic approach for the area that encompasses the wider concept of circular economy. Thanks to innovative technologies, some residential buildings in the Old Dockyards will use heating systems based on biogas from black water. Such systems reuse the warm air produced by industrial factories, as well as captured heat and nutrients from used water from dishwashers and laundry machines.

Thanks to the regeneration of the area, new business models such as car and bike sharing have developed, and the city has launched activities that challenge residents’ linear lifestyles. People can already experience the circular economy through the presence of temporary buildings constructed with recycled materials and guided walks.

The years between the planning and the effective realisation of the project have been transformed into opportunities, giving special attention to the possible temporary use of the grounds, allowing the city to renovate the quay walls and building a bridge for pedestrians and cyclists during that time.

During the long process of tendering, sogent has created temporary areas for city gardening and city farming. A very unusual project is the renovation of a series of disused gravel tanks. A team of young architects and an artist transformed this area into a unique multi-purpose public space that is currently used by Ghent’s citizens for several types of events. This also raised awareness of the project itself and the wider circular economy concept.