Cities and Regions: Accelerating system change for a circular transition in cities and regions

The Cities & Regions Leadership Group in 2021 continued the work on the analysis of indicators to measure the transition to the circular economy in cities and regions.

This workshop capitalized on those discussion points, gearing the discussions towards the definition of operational cooperation leads between different initiatives supporting CE transition in cities and regions.

The European Commission is currently working on a revision of the Waste Framework Directive. This revision aims to improve the overall environmental outcome of waste management in line with the waste hierarchy and the implementation of the polluter pays principle. The call for evidence is open for feedback until 22 February 2022.

Streaming Service of the European Commission
EU Platform on Food Losses & Food Waste: priorities and operations in the new mandate

Microplastics from textiles: towards a circular economy for textiles in Europe

Microplastics from textiles: towards a circular economy for textiles in Europe

Awareness is increasing about the presence of microplastics in our environment and their negative impact on ecosystems, animals and people. The wearing/washing of textiles made from synthetic fibers is one recognised source of microplastics in the environment. Textiles and plastics are among the key value chains in the EU circular economy action plan.

It is possible to reduce or prevent the release of microplastics from textiles by implementing sustainable design and production processes and caretaking measures that control microplastic emissions during use, and by improving disposal and end-of-life processing.

This briefing aims to improve our understanding of microplastics released from textiles from a European perspective and identify pathways to reduce or prevent this release. 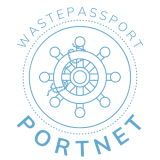 To solve some challenges in the port environment, Blue Room Innovation is developing a solution based on blockchain technology: PortNet. It is a blockchain-powered waste management solution for greener, more efficient ports. A WastePassport has also been developed that connects waste disposed in port reception facilities to treatment plants.

RECICLOS provides incentives for recycling cans and plastic beverage bottles. Its main objective is to increase and improve recycling of these objects by introducing rewards that motivate people to do so. When people recycle using the RECICLOS app, they receive points that can be exchanged for sustainable prizes or used for local projects.

Although previous researchers have explored the circular economy practices of different businesses in various contexts, only a few papers have focused on the sustainable preparation and consumption of food in the tourism and hospitality industry. This paper sheds light on case studies from hotels, restaurants and cafés that are located in urban tourism destinations.

This research suggests that catering businesses can implement a number of responsible initiatives by introducing preventive measures and recycling practices to curb food loss and the generation of waste. In conclusion, it finds that there is scope for regulatory authorities and policy makers to encourage hospitality practitioners to minimise food waste.

The project EffiSludge for LIFE has found a way to clean industrial wastewater with significant environmental benefits. The project team has developed an integrated wastewater treatment method that takes an "industrial symbiosis" approach where the waste from one sector becomes a resource for another.

The online symposium "Smart Process Systems Engineering 2022: Towards sustainable and circular production processes" on 2-4 March 2022 will cover both engineering and social sciences. You can register and submit an abstract for a flash presentation until 20 February.

Organising Body:
The Provincial Council of Gipuzkoa’s Department of the Environment and Hydraulic Works

The Provincial Council of Gipuzkoa’s Department of the Environment and Hydraulic Works is organising the IV International Circular Economy Meeting. The event will take place in hybrid form on 2 February 2022. The meeting can be followed online, and international, national and local experts will analyse the state of play of the circular economy. They will also take a closer look at some very interesting subjects, including the new plastics economy, bioeconomy and innovation in the business world. 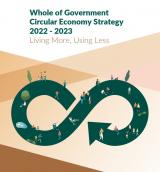 The Whole of Government Circular Economy Strategy is Ireland’s first national circular economy strategy. The Strategy is a key addition to the Government’s drive to achieve a 51% reduction in overall greenhouse gas emissions by 2030 and to get on a path to reach net-zero emissions by no later than 2050, as per commitments in the Programme for Government and the Climate Act 2021.

The Strategy explains what the circular economy is, why Ireland needs to deliver on a circular economy and how national policy will develop to support that goal. A circular economy can have positive environmental, economic and social impacts, such as reduced plastic pollution, new jobs and better quality, longer lasting consumer products.

The webinar series is aimed at city representatives and other stakeholders interested in fostering and accelerating the circular economy transition in cities, and is open to all who want to learn more about the different opportunities offered by the circular economy implemented in an urban context.

On 21 January 2022 the ECESP Coordination Group 2020-2023 attended its third meeting which focussed on summarising the numerous achievements from the past year, including the recent Dubai Expo and what the ECESP had achieved there, its future plans and the 2022 programme.

Outcome document of the Leadership Group on Cities and regions 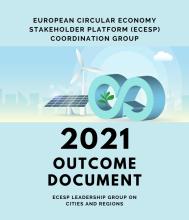 Cities and local areas play a major role regionally in promoting the launch and implementation of systemic changes needed for the transition towards a circular economy. The ECESP Leadership Group on Cities and Regions focuses on this approach. In 2021, three meetings and two EU Circular Talks (EUCT) were organised.

Yuman Village is a temple of the circular economy located in Brussels. It offers a unique 'one stop shopping' experience that encourages the emergence of new circular economy models, creates local jobs and reduces the number of trips needed to buy sustainable and local products.

Madeira Circular Platform provides a forum bringing together key actors for the transition to the circular economy (CE), including the civil society, businesses, public administrations and the scientific and academic communities.

Its main objective is to create the communication channels necessary to carry out and promote collaborative action and to support the implementation of the guidelines of the Madeira Circular Agenda, which are much needed to encourage the circular movement.

The Platform is a community of stakeholders in the form of a portal to support the Autonomous Region of Madeira in the transition to the CE and featuring good practices leading to the efficient and sustainable use of resources all along the business value chain.

Circusol - Circular Business Models for the Solar Power Industry - is an Innovation Action project funded by the EU Horizon 2020 programme, bringing together 15 partners from 7 European countries to develop and demonstrate business solutions for the circular economy in the solar power sector.

Photovoltaics (PV) currently accounts for about 5 % of world’s electricity generation capacity. As the PV and EV (electric vehicle) markets grow, so will their demand for raw materials, as well as their "waste" output. How to make sure that the material aspect of the energy transition will also be sustainable? Product-Service Systems (PSS) could be the answer.

Re4circular: a new AI-based solution to improve the sorting and cataloguing of textile waste

Atelier Riforma started as a social economy startup with a pioneer marketplace for upcycled garments. Realising that the sorting and cataloguing of textile waste were too labour-intensive for industry standards, founders came up with the idea of developing an AI-based automated solution - called Re4circular - to create a digitized and truly efficient post-consumer clothing supply chain.

Progress towards preventing waste in Europe: the textile case 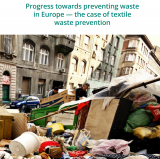 To support this objective, the EU and all its Member States have put in place legislation that promotes activities in products' life cycles aimed at reducing the amount of waste generated.

This report aims to assess progress towards the main objective of waste prevention: decoupling (i. e. breaking the link between waste generation and economic growth).

This briefing provides a snapshot of the status of trading non-hazardous, recyclable waste within the EU. Its aim is to provide knowledge and information to support the review of the EU's Waste Shipment Regulation.

The idea is to improve the functioning of secondary material markets by offering insights and potential solutions to help ensure that waste is treated in the best possible way in line with the principles of the waste hierarchy.

The Madeira Circular Agenda bolsters the position of the Autonomous Region of Madeira (RAM) as a circular economy hotspot.

It involves civil society and public and private entities in a system that seeks to keep materials in the economy, and to promote efficiency, circularity and sustainability as competitiveness and differentiation factors for the regional economy. The Agenda also aims to ensure that RAM companies act as circular economy leaders in their respective sectors, adopting best practices and creating innovative solutions based on circularity principles, particularly in sectors deemed critical for the region, namely agri-food, construction, tourism, social sector and the sea.

Exploration of the plastic recycling landscape in Flanders

Exploration of the plastic recycling landscape in Flanders 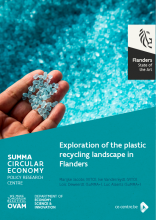 In order to identify and analyse possible bottlenecks and opportunities in the current post-consumer plastic recycling landscape in Flanders, available data sources were summarised and relevant sector organisations and companies interviewed. Specifically, interviews were organised with companies working on polyolefins in order to gain greater insight into the potential for circularity of the value chain for this type of polymer and its applications.