Priority checklist: The current degree of uptake of circular economy in all stages of food/feed production chains in Europe 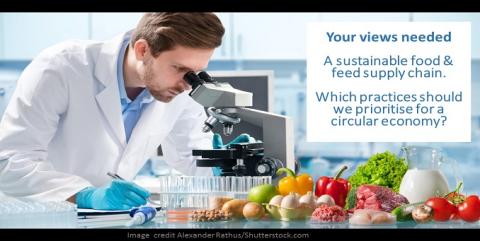 One aspect of this project involves conducting a literature review to gather and evaluate evidence of vulnerabilities in the circular economy approach to food/feed safety, plant, animal and human health and the environment. As a new driver, the implementation of circular economy approaches might introduce a set of emerging risks, understood as risks resulting from a newly identified hazard to which significant exposure may occur, or from unexpected new or increased significant exposure and/or susceptibility to a known hazard.

A set of circular economy areas and practices which might pose risks to food/feed safety and the environment has already been identified. In order to target the next steps of the literature search, EFSA is launching a survey to complement and prioritise these areas according to predefined criteria. Based on the findings of the survey, selected emerging risks related to circular economy practices will be described in detail in the subsequent steps of the project.

You are encouraged to participate in the survey, which will be open until Monday, 21 June.