Global Alliance on the circular economy and resource efficiency 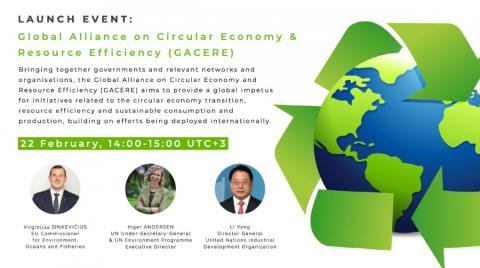 In the March 2020 Circular Economy Action Plan, the Commission proposed a global alliance to identify knowledge and governance gaps in advancing a global circular economy and take forward partnership initiatives, including major economies.

Bringing together governments and relevant networks and organisations, the Global Alliance on Circular Economy and Resource Efficiency (GACERE) aims to provide a global impetus for initiatives related to the circular economy transition, resource efficiency and sustainable consumption and production, building on efforts being deployed internationally. GACERE members will do so by working together and advocating at the political level and in multilateral fora, in particular at the United Nations General Assembly (UNGA), the United Nations Environment Assembly (UNEA) and in G7/G20.

GACERE will be launched on Monday 22 February 2021 from 12:00 until 13:15 CET (UTC+1) in the margins of the first segment of the fifth meeting of the United Nations Environment Assembly (UNEA 5).  Follow the web-streamed event:

Ministers of countries who have joined GACERE and stakeholders will be invited to provide their perspectives on the Alliance's intended role in supporting a global just transition to circular and resource-efficient economies and the achievement of the 2030 Agenda for Sustainable Development.