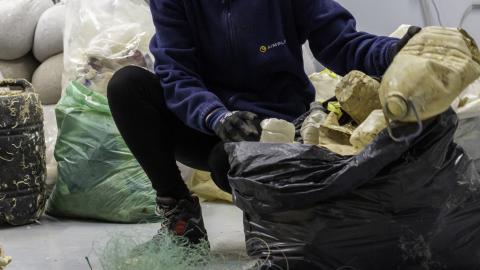 The project, now moving into its third phase, expects to make new products from this litter through pyrolysis. The Valencia port Foundation has joined the project with the aim of replicating the model in other fishermen’s associations. An action protocol will be used to prepare individual action guides.

The RepescaPlas project, with the participation of AIMPLAS, the Asociación Vertidos Cero, the Fishermen’s Association of Gandia, the Fishermen’s Association of la Restinga, the Fundación Global Nature, the Valenciaport Foundation, the Port of Marín and the Universidad de Vigo, is being carried out with the collaboration of the Fundación Biodiversidad and the Ministry for Ecological Transition and Demographic Challenge through the Pleamar Programme. It is co-funded by the Spanish Federation of Municipalities and Provinces (FEMP).

During the first two years, RepescaPlas project collected a total of 5,000 kg of marine litter from the waters in the Ports of Marín (Galicia), Restinga (El Hierro) and Gandia (Valencia). Collected debris were characterized by type and the geolocations of the areas where it was found were identified by fishermen. This information will be used to define a marine litter density map of the studied seabeds. The waste recovery process made it possible to use low-density polyethylene to build a composting machine made of 50% recycled material and marine waste.

During the 3rd phase of the project, studies are being carried out to determine the feasibility of setting up plants in ports to obtain fuel that can be used by sea-going vessels.