Employment and the circular economy: Job creation in a more resource efficient Britain

Employment and the circular economy: Job creation in a more resource efficient Britain 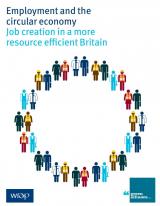 Britain faces huge economic challenges in its use of labour and scarce natural resources. Although unemployment is now falling, the risk of being out of work is higher in some regions and for some types of occupations. While Britain has significantly increased its resource efficiency in recent years, supply risks in an increasingly competitive global economy mean that we need to get better at using natural resources. A new research study, undertaken jointly by WRAP and the Green Alliance, shows that these challenges are linked: improving our resource efficiency can make a valuable contribution to improving Britain’s labour market situation.

One route to improving resource efficiency is to develop a circular economy. This involves keeping products and resources in use for as long as possible through recovery, reuse, repair, remanufacturing and recycling. In addition to protecting the environment, this potentially offers substantial economic benefits. These include greater economic stability through increased resource security and new business and employment opportunities from an expanding industrial sector. This study focuses on the second aspect and identifies the scope for the growth of the circular economy to offer new jobs.

The study finds that regions where unemployment is higher, such as the North East and the West Midlands, could see the greatest impact on job creation, especially among low to mid-skilled occupations where job losses are projected for the future.

The study finds that if we stay on the current development path for the circular economy in Britain, then by 2030 the sector could:

Alternatively, under a transformational scenario where there was a more extensive expansion of circular economy activities, by 2030 the sector could create over half a million jobs, reduce unemployment by over 100,000 and potentially offset around 18% of the expected future losses in skilled employment.