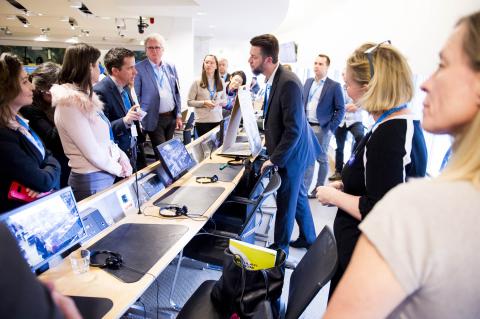 Country:
EU
Hundreds of circular economy stakeholders from across Europe shared their success stories and the challenges they face during the Circular Economy Stakeholder Conference, hosted by the European Commission and the European Economic and Social Committee on 6 and 7 March 2019. Over 600 people attended Day 1 and over 350 Day 2.

Opening the conference, the Commission’s First Vice-President Frans Timmermans said that “the very idea of the circular economy is becoming a success for Europe”, emphasising that our continent is now on an irreversible trend towards circularity. First Vice President Timmermans also highlighted that circular frontrunners have a first-mover advantage, facing lower costs and reaping more benefits from the transition than those who will go through this transition later on.
The Commission’s Vice-President Jyrki Katainen underlined that the European Circular Economy Stakeholder Platform is “probably one of the biggest successes” of the Circular Economy Action Plan.
Day 1 focused on the state of play of the Circular Economy Action Plan, in particular in the light of the report on the implementation of the Circular Economy Action Plan published on 4 March and "The Circulars' Prize" awarded to the European Commission by the World Economic Forum and Forum of Young Global Leaders in the Public Sector category. First Vice-President Timmermans and the President of the European Economic and Social Committee, Luca Jahier, also insisted on the nexus between sustainability at large and circularity, which was also extensively discussed in the afternoon plenary.
6 breakout sessions took place and touched upon policies to continue the transition:
and enablers for the transition:
Opening Day 2, EESC member Cillian Lohan called on participants to reflect on a key question for the development of the Circular Economy: "who is going to drive the change? Should it be consumers, business or policy makers: who should go first?"

"While all three need to play an equal role once the Circular Economy is implemented, said Lohan, "I would argue that in making the initial change responsibility should not be put on the consumer. It is changes in business practices, supported by policy changes and policy infrastructure that will actually create the environment where consumers have the affordable and accessible options that will allow them to make circular, sustainable choices ", he stressed.

Smoking provides an example of a massive cultural behaviour change brought about by a change of policy: "there has never been a better time to stop smoking than now because all the infrastructure supports you in that", argued Lohan.

Ladeja Godina Košir, Chair of the European Circular Economy Stakeholder Platform’s Coordination Group, called on participants to make the most of the Platform as a support network to help solve the problems they encounter in their Circular Economy projects: "We want to be the network of networks for everyone. You don't have to be a star and celebrate your success – you can share your worries and problems. We do not have the answers – therefore it is important to ask the right questions. And to have a community where this is allowed."

Joanna Drake, Deputy Director General, DG Environment, stressed the crucial role of stakeholder involvement in the European Commission's Circular Economy initiatives: "part of their success is a focus on a bottom-up approach calling on support and engagement with stakeholders through cooperation, platforms, exchanges of best practices and voluntary business approaches", she said. "In January, the World Economic Forum rewarded the European Commission for its global leadership on the Circular Economy. We truly feel that this prize belongs to all of you as well."

Discussions split up in 8 interactive workshops focusing on the following topics:
The day closed with the launch of the Kindred Spirits exhibition, displaying the photographs of Suzanne Jongmans that recreate Old Masters with intricate costumes using recycled plastics, old blankets and used packaging. Participants were also inspired by an unconventional speech on suggestions for navigating what's next in the Circular Economy speech by Rieta Aliredjo, Chair of the Stars-are-circular Foundation: "be curious; aware; generous and playful".

Presentations and photos are now online, while reports with findings from each workshop will be published shortly on the conference page.