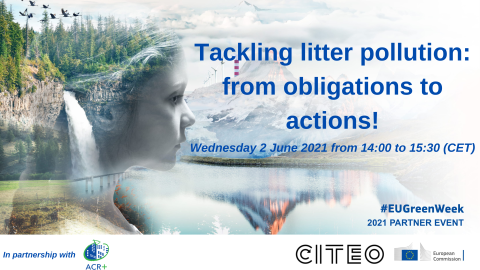 Every year, the European Green Week brings together governments, industries, NGOs, academics, and the press for a unique exchange of ideas and good practices on environment and climate issues. The 2021 edition of the European Green Week is dedicated to "zero pollution ambition” and is an opportunity to raise awareness among all stakeholders and citizens on how to join forces to achieve a pollution and toxic-free environment.

As the largest Extended Producer Responsibility (EPR) organisation in Europe in charge of household packaging and graphic papers, Citeo is fully concerned by the fight against litter pollution. In order to address the main questions and challenges surrounding this complex issue Citeo is organising a coffee-break conference - in partnership wIth ACR+ - on Wednesday 2 June at 2 p.m. (CEST) on Tackling litter pollution: from obligations to actions!

The issue of littering is at the heart of the European agenda. The directive on the reduction of the impact of certain plastic products on the environment (SUP) established a framework to limit plastic leaks into the environment, particularly on beaches and in the oceans, by giving new responsibilities to the EPR schemes. The European Parliament recently adopted a resolution on the impact of marine litter on fisheries, sponsored by former navigator Catherine Chabaud, which warns of the growing increase of marine litter. This has got an impact not only on marine biodiversity, but also on human health.

In a broader context, the European Commission last year presented its new plan for a circular economy, which explicitly aims to fight against litter, by promoting a coherent European framework.

Through this event, Citeo would like to share good practices and concrete actions on the ways to tackle litter pollution. By including institutional actors, political frontrunner stakeholders of the packaging value chain and NGOs, Citeo would like to foster the dialogue between all the actors to tackle this pollution, therefore preserving the biodiversity and accelerating the circular economy within the European Union.