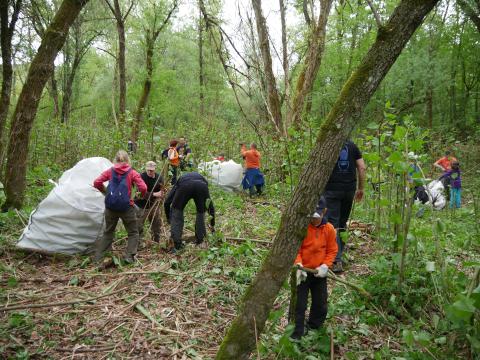 Organisation or Company:
City of Ljubljana

The initiative began with voluntary Japanese knotweed removal campaigns, after which the plant’s dry stems were harvested, ground and processed into paper. Ljubljana is one of the first paper producers in the world to use Japanese knotweed at a semi-industrial level.

The innovative solution tackles the problem of invasive non-native species in an innovative way aligned with the principles of circular economy. The city used the resulting paper for the production of paper bags and notebooks, and the public company Snaga printed the English version of its magazine Snagazin on it.

The paper-manufacturing project from Japanese knotweed gave the city an opportunity to find inventive solutions to deal with this invasive plant while also putting the circular economy into practice in Ljubljana.

The idea to produce paper from Japanese knotweed on a semi-industrial scale was a pilot project. The main concern was the effect of Japanese knotweed pulp on papermaking machines. The machines are very sensitive to fibre size, therefore the pre-treatment of the pulp had to be carefully calculated and carried out. Another concern was the content of impurities in the paper that can affect printing. As it turned out the knotweed paper was quite easy to print on, and no additional measures needed to be implemented.

The paper production attracted significant media attention and was also very well received by experts and the public. With the shift from linear to circular, the invasive alien species issue is solved while creating a useful product.

In Slovenia, there are no special landfills for invasive alien plants so all biomass the city collects is taken to incinerators. As a ‘zero waste city’, Ljubljana opted to focus on controlling the invasive plant population by developing circular production processes instead of incinerating the knotweed, thereby reducing carbon-dioxide emissions in the city and increasing the resilience of local economies and ecologies.

With the help of improved technologies and knowledge of traditional craftmaking, Japanese knotweed can serves as an input material to produce paper. But the city anticipates new products will be designed and produced in the future.

By introducing ways to use Japanese knotweed as a local source of cellulose, the project started to encourage new community economies and field works and promoted a trans-disciplinary approach to address the issue of invasive species.

Although many European cities and urban areas are faced with the issue of invasive alien species, few are using them as a useful resource or material for further zero waste production or manufacture. Ljubljana believes this project is very relevant for other urban authorities in Europe and has great potential to attract public attention and interest.

Invasive alien species are a complex subject that requires an interdisciplinary approach. To enrich the project and understand the wide array of circular economy opportunities, the city advises that as many stakeholders as possible should be involved.

The involvement of residents as volunteers is preferable initially to gain new valuable channels for information dissemination and provide new opportunities for green jobs. Ultimately, though, the implementation of circular economy projects must be adapted to local conditions.