From waste to resource productivity 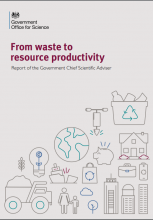 Waste nationally and globally is increasingly problematic and challenging to policymakers. It is a problem that is increasing in scale and scope. It matters to all of us for a series of reasons: