Ballymun's boiler house is now a 3D textbook on reuse 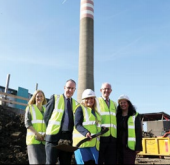 When the Dublin suburb of Ballymun was built in the 1960s in response to poor housing in the city’s tenements, it was hailed as the future of living. Ireland’s first high-rise scheme included the first major shopping centre on the north side of the capital, a swimming pool and a public library.

Its landmark was the towering chimney stack of its boiler house. Completed in 1966, this was the largest civic heating scheme in Ireland and the UK, supplying under-floor heating to 3 000 flats. However, when the flats were demolished, it became redundant and it too was set to be torn down.

In 2011 a local environmental project, the Rediscovery Centre, and Dublin City Council obtained funding from the EU's LIFE Programme to transform the boiler house with an imaginative, eco-friendly project called WISER (Working with Industrial Spaces to Exemplify Reuse). The written-off building was repurposed into a prototype ‘3D textbook’.

Recycling is at the heart of the Rediscovery Centre’s mission: paint salvaged from local recycling centres was used during rebuilding, furniture and fittings destined for landfill were upcycled and reused for the building’s finishing touches.

The old boiler house is now a cutting-edge creative space connecting people, resources and ideas called the Rediscovery Centre, which organises creative workshops, education and training, but also includes an ecostore, an events space and a green café that exemplifies reuse and sustainability. The centre is home to four social enterprises: