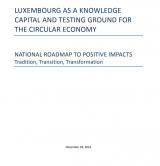 The circular economy is more than a potential model for Luxembourg; it is an economic imperative. Due to its history of exhausting resources then finding substitutes, Luxembourg is already a testing ground for circularity methods. For example its steel, aluminum, glass, and other industries are expert at re-using secondary raw materials. The re-use of those materials is core to their economic survival. It is a competitive necessity to sharpen their capacities in those areas.

Because Luxembourg’s exemplary European society is based on equity, cultural tolerance, economic stability, responsive government and manageable size, the country is a powerful proving ground for circularity. Its heritage of quality and its service-based economy allow leveraging of skills to take advantage of the embedded growth potential. The likely benefits for Luxembourg are considerable. The starting position is excellent. The capabilities and motivation seem to be in place. It is now only a question of providing a nucleus and initial catalyst to accelerate the transition towards a circular economy at scale. The Grand Duchy of Luxembourg and the Ministry of the Economy in particular have powerful roles to play as catalysts for circularity.

In the present situation where knowledge of circular economy potential is low but know-how for supporting technology and services is high, the government has a special brief opportunity to seize the initiative by delivering powerful messages about circularity through initiating and coordinating actions, as well as supporting those with a solid foundation of education, training and national co-branding. By leveraging those mechanisms the government will provide the enabling framework for its stakeholders to implement a circular economy with innovative lighthouse initiatives.