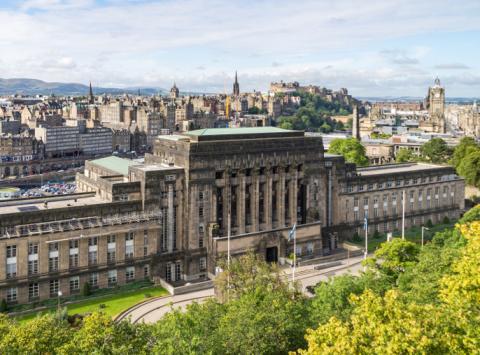 A cross-sectoral coalition of Scottish civil society organisations called for the region's government to adopt an ambitious and comprehensive Circular Economy Bill on 28 August 2019. The coalition of over 30 organisations is led by Scottish Environment LINK, and includes Friends of the Earth Scotland, Scottish Wildlife Trust, Marine Conservation Society, UNISON, Oxfam Scotland, Project Heather, IBioIC, Soilutions Ltd, Wellbeing Economy Alliance, Binn Group, and Construction Scotland Innovation Centre. It calls for the Bill to include targets for reducing our consumption of resources in order to help address climate change, biodiversity loss and our inequitable consumption of planetary resources.

The Scottish government adopted "Making Things Last", a circular economy strategy for Scotland in February 2016, and Zero Waste Scotland is highly active in sharing the circular vision throughout Europe. Examples of circular economy are spreading throughout the country as well; these include: the Remanufacturing Institute, Jaw Brew, which is using leftover bread to produce beer, repair-focused social enterprises, such as the Edinburgh Remakery, and EGG lighting. The government has also set up four ‘Circular Regions’ – Glasgow, Edinburgh, Tayside and the North East – which each receive tailored support to promote local circular opportunities. Such initiatives are valuable, but Scotland's civil society calls for change on a larger scale and across the economy.

This call has since been heeded by the Scottish government: on 4 September 2019, it presented the outline of a Circular Economy Bill. In its 2019 / 2020 Programme for Government, the government committed to bringing forward such a bill during this legislative session, with consultations opening in Autumn 2019. Among others, "provisions in the Bill will enable charges to be applied in relation to the provision of items such as single-use drinks cups, helping to tackle the 4,000 tonnes of waste beverage cups create in Scotland each year, and create a new penalty for littering from vehicles".