Biopolymers from bakery waste: now you can eat your cake and wrap the next cake, too 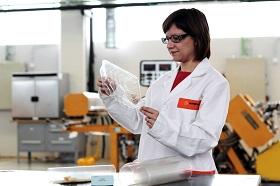 BREAD4PLA is a project conducted by a consortium of four European organisations led by AIMPLAS.

It seeked to demonstrate, in a pre-productive pilot plant process, the viability of poly(lactic  acid), a bioplastic polymer,(PLA) synthesized from waste products of the bakery industry.

Using an enzymatic process and associated technologies, it makes it possible to produce a biodegradable film from bakery waste. This film would be then used in the packaging of bakery products, thus closing the life cycle.

The PLA obtained by synthetizing bakery waste was completely comparable with its currently available commercial equivalent. This biopolymer could be even more sustainable then the other biodegradable film used in the industry: the raw material did not come from agricultural produce, that might have caused direct or indirect land use change, but instead from a resource that was previously only recognised as waste and would be landfilled. Moreover, using waste from bakeries also reduces the potential price volatility of supply. The film was also compostable, thus removing the waste completely at the end of the cycle.

The overall results from the demonstration project after the 3-year period proved that the bakery waste is  a suitable  raw  material that can  be  an  actual  environmentally  friendly  alternative to  obtain  100% biodegradable and compostable plastic, with satisfactory performance for bakery products.

Moreover, mechanical and sensory tests made on prototypes of film made from this biopolymer  all showed that the packaging made through this technique was completely comparable to industry equivalents.