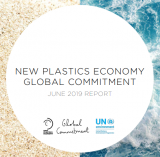 The New Plastics Economy Global Commitment unites businesses, governments, and other organisations behind a common vision and targets to address plastic waste and pollution at its source. It is led by the Ellen MacArthur Foundation in collaboration with the UN Environment Program. Launched in October 2018, the Global Commitment already unites more than 400 organisations in its common vision of a circular economy for plastics, keeping plastics in the economy and out of the ocean. Signatories include:

All 400+ organisations have endorsed one common vision of a circular economy for plastics, in which plastics never become waste. As this June 2019 report shows, the number of business signatories has grown from over 100 to nearly 200 in the seven months since the launch.