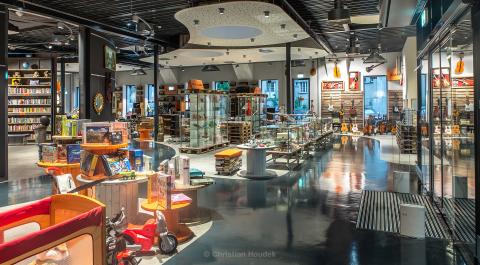 Vienna's Municipal Department 48 (MD 48) is responsible for the city's waste management. It is active in reuse since 1989, when the city’s first reuse shop – the so called 48er-Basar – was founded. For the purpose of reuse and waste prevention, still usable goods were collected at the recycling centres of the city and sold in the 48er-Basar.

As a further development of the 48er-Basar, the 48er-Tandler was opened in 2015. With its central location and a modern interior design thanks to upcycled furniture, it aims to attract all population groups.

The MD 48 has carried out an extensive campaign in order to inform citizens about the possibility of bringing their reusable goods to one of the recycling centres instead of disposing of them. In addition to items from the recycling centres, unclaimed goods from the city’s lost and found service as well as items from the city administration which are no longer in use are given a second chance in the reuse shop.

The 48-er Tandler provides a combination of social and economic benefits, as all revenues are donated to charitable purposes and citizens have access to good-quality secondhand goods at affordable price.