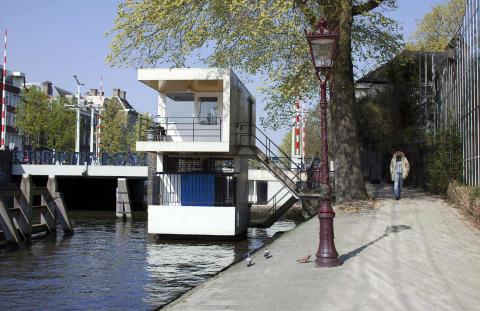 For 100 years, Amsterdam’s bridge houses have accommodated the city’s bridge keepers, responsible for opening and closing bridges for the passage of boat traffic on the busy canals. With the introduction of a centralised bridge control system, the bridge houses became redundant.

In 2012, the architecture office Space&Matter (known for De Ceuvel, a plot of polluted land transformed into an eco-space for creative and social enterprises in Amsterdam), project development partner Grayfield, and Seven New Things presented the SWEETS hotel plan to the city of Amsterdam. Their vision: to transform the city’s bridge houses into tiny hotel suites, thereby introducing travellers to new neighbourhoods and unexpected experiences in the city as well.

Since then, 18 bridge houses have been upcycled into hotel rooms, and another 10 are still to be refurbished. By applying the concept of adaptive reuse, SWEETS prevented their demolition and gave these buildings a second life.

Since 2012 SWEETS has prevented demolition of 28 bridge houses, giving them a renewed purpose as hotel rooms.