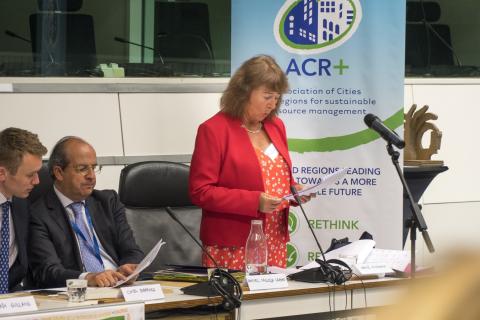 ACR+  has consistently advocated to accelerate the circular economy, while also showcasing urban best practice in circular economy throughout 2019 at various events across the European continent.

Once again, this year ACR+ was highly active during the EU Green Week, this time being even recognized as an official Associate. The 2019 edition looked at:

During the 2019 Green Week, ACR+ and several of its members helped organise the opening session, the European Week for Waste Reduction (EWWR) award ceremony, but also supported events on topics such as:

ACR+ and some of its members also contributed actively to the Urban Future Global Conference (UFGC) 2019 from 22 to 24 May 2019. The UFGC 2019, which took place in Oslo, the European Green Capital 2019, enabled passionate and inspiring city changers from all over the world to meet and exchange about their good practices, doubts, failures and successes. Circular economy was one of the hot topics of this edition, with ACR+ moderating a session on Circular economy best practice from cities. During that session, ACR+ members Brussels, Maribor and Aalborg showcased how to get started with circular economy and some of their amazing projects.

The ACR+ has also participated in a variety of conferences and events in order to promote good examples and approaches on circular economy from cities and regions, with tourism often being a focal theme. At the UrbanWINS final conference (4 April 2019, Brussels), ACR+ hosted a workshop on Community based decision making for better waste management in tourism, while on 16 May 2019 in Paris the association hosted an ORDIF Technical discussion about the management of tourism related waste, and shared its view on how public authorities can promote sustainable tourism and local loops of circular economy at the 18 June 2019 URBELAC meeting in Maribor.

Other events where ACR+ furthered the circular economy include the Urban Agenda Partnership on Circular Economy meeting (28-29 March 2019, Oslo), the TRiFOCAL conference (14 June 2019, Dublin), where ACR+ discussed challenges of food waste for urban authorities, as well as the Paris International Stewardship Conference (2-4 July 2019, Paris), where ACR+ presented the state of the art of EPR in the EU legal context.